Premier League heavyweights Liverpool have ended their winless run after the slender Champions League Group A win over visitors Ajax Amsterdam at Anfield on Tuesday. The Reds came into the Ajax game on the back of a run of two games without a win. They were able to put an end to the run thanks to the late goal from Joel Matipwho scored his first Champions League goal in nine years as a result. 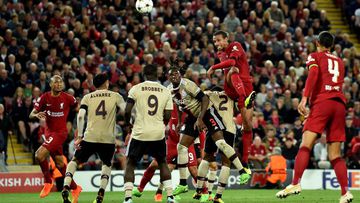 Liverpool have been drawn in Group A in this season’s Champions League group stage alongside Dutch team Ajax, Italian side Napoli and Scottish club Rangers. They made a bad start in the group after suffering a 4-1 defeat at the hands of hosts Napoli with the likes of Piotr Zelinksi (two goals), ZamboAnguissa and substitute Giovanni Simeone getting the goals for the current Italian Serie A leaders. The Reds were able to bounce back from the thrashing against Napoli with the victory over Ajax in their first Champions League game at home this season.

Egyptian star Mohamed Salah has not hit top form this season with just one goal from his last seven games leading up to the Ajax game. However, he was back to form against Ajax after getting the first goal of the game with 17 minutes on the clock off the assist from Portuguese international forward Diogo Jota. Salah and Liverpool led for just ten minutes before in-form Ghanaian star Mohamed Kudus replied for the visitors making it two goals in two Champions League games this season. The goal from Kudus ensured that Liverpool and Ajax went into the half-time break with a goal each. Liverpool would go on to take the win late in the game with their second goal thanks to defender Joel Matip via a header from a Kostas Tsimikas corner kick.

Liverpool had drawn one and lost one of their last two games in all competitions since the late win over Newcastle United in the Premier League last month. They were able to end the two-game winless run against Ajax Amsterdam.